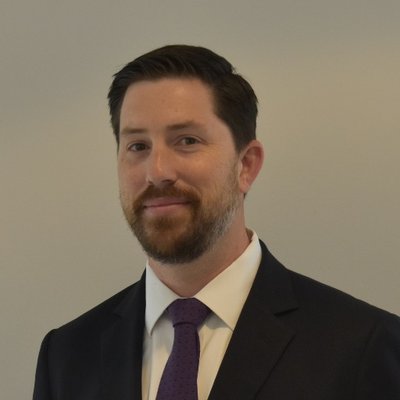 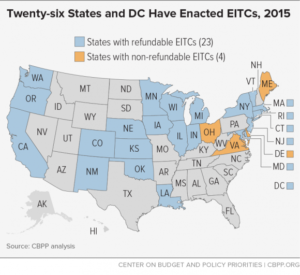 The Earned Income Tax Credit (EITC) is a forward-thinking economic policy designed to assist our most economically disadvantaged working families by helping them break the cycle of poverty.  It benefits low-income families and incentivizes people to work, which is the key to economic mobility. Studies show those without jobs are four times more likely to be in poverty than those who are employed. A Missouri Earned Income Tax Credit (EITC), based on the existing federal credit, is at its core a tax cut that provides targeted assistance to an estimated 521,817 low-income working taxpayers all across our state by increasing their take-home pay without increasing our region’s cost of living.

For the past two years, the St. Louis Regional Chamber has supported passing a Missouri Earned Income Tax Credit that will result in a tax cut for 20% of working families in the state of Missouri. This means that hundreds of thousands of working Missourians would take home more of their pay, cutting taxes for more than half a million Missouri households. A major benefit of the policy is that the families directly impacted by the tax credit are spending the majority of their money on goods and services, thereby putting cash directly back into the local economy. When our local economy is stronger, local families are stronger.

The benefits of an eitc

A Missouri EITC, modeled on the successful federal program created in 1975 and in place since that time, is at its core a tax cut that provides targeted assistance to low-income families in Missouri. The Ferguson Commission’s Forward Through Ferguson report recommended passage of a state EITC as a way to help reduce the number of Missouri citizens living in poverty and to improve health, economic, and educational outputs. 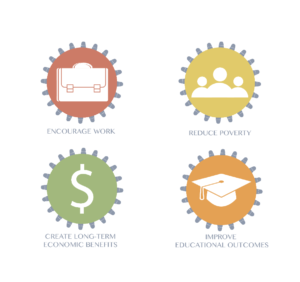 Three out of five filers who receive the federal credit use it just temporarily – one or two years at a time, according to research from the Center for Budget and Policy Priorities. The EITC is also designed to encourage workers at the lower end of the wage scale to work more hours. Full-time work experience often translates into better job opportunities and a higher wage over time.

Adopting a state Missouri EITC provides a mechanism for an immediate, targeted tax cut aimed at Missouri’s low-income working families. The EITC is designed to lift these families out of poverty and put them on a path towards self-sustainment. According to the Center on Budget and Policy Priorities, 6.5 million people were lifted above the poverty line in 2015 through the EITC.

A state EITC helps working families pay for basic necessities such as childcare, utilities and transportation out of their own wages, which keeps them at work rather than having to rely on public benefits. Therefore, the money spent by Missourians receiving this tax cut will be placed back into the local economy. Additionally, by lifting families out of poverty a more prosperous consumer base is created leading to a more sustainable local economy in the future.

290,000 Missouri children – 21% of all our state’s children, from every county and region – live in poverty today. However, multiple studies have shown that children living in families receiving the federal EITC have improved health and academic outcomes and greater lifetime earnings, decreasing the risk of a lifetime of poverty. Of the 6.5 million people lifted out of poverty in 2015 by the EITC, over half were children. This provides children with new educational opportunities that once seemed unreachable.

Invest in Missouri and Missouri’s Families

Creating a state EITC requires Missouri to make an investment, but it is an investment worth making. Investing in a state EITC will encourage work without raising the overall cost of living, help break the cycle of poverty for Missouri’s children and generate economic activity in communities across our state. This opportunity comes at an imperative time for families in Missouri, especially those struggling with poverty. The EITC will provide families with a much-needed economic boost while, at the same time, sustaining and growing our economy.